Ruta Upalekar has a drive for helping others, both at home and abroad. Her volunteer work with two India-based charities spurred her desire to begin running in 2015, an activity she uses as a vehicle for fundraising.

The Hopkinton resident and will interlace her twin passions when she runs the Boston Marathon virtually in October to raise funds for her homeland of India as the country recovers from the COVID-19 pandemic.

“I’m not a born runner,” said Upalekar, president of the South Asian Circle of Hopkinton (SACH). “And I was never a runner in my early years. But my leap to running started with a couch to 5K, and then I took it all the way to a 26.2-mile race in 2015.”

She first became intrigued about the sport because of a beginner runner’s training offered by Asha Community Health and Development Society, which is based in New Delhi. The word “asha” means hope in Hindi. The group works toward the empowerment of women and the promotion of educational opportunities. 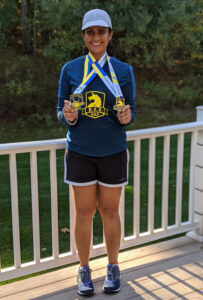 Ruta Upalekar will participate in the virtual version of the Boston Marathon and raise money for causes in India.

“As I started training, I began learning about this organization as well as AID, the Association for India’s Development,” Upalekar continued. “Then I started training on the Minuteman Trail in Somerville with elite runner Jonathan Weiner.”

She learned how to choose terrains, increase her endurance and listen to her body, picking up internal cues on when to rest and when to ramp up her performance. She gradually increased from 5K runs to 10K runs up to marathon-length sessions over the course of a year.

“I feel remiss that I didn’t do it before,” Upalekar said of running. “But I am very grateful that I’ve discovered this passion of mine. It’s become a part of my life.”

Running has become integral to Upalekar as both a means of staying healthy and as a way to connect with others in the community. She was the inspiration behind the SACH’s Step it Up for Hopkinton 5K, which was run virtually from Sept. 18-26, with the proceeds benefiting the Hopkinton Emergency Fund.

“Hopkinton is considered well-to-do demographically,” she explained. “But there are fellow community members who really need help during this difficult time. And you’re keeping healthy at the same time that you raise money, so it’s a win-win.”

Upalekar also created a SACH Sunday morning running and walking group to engage members in conversation and exercise. Members join in pre-run stretches as well as post-run yoga sessions. “I love having people get interested in learning about ways to stay fit and to prevent injuries,” she said. “And there’s also the social aspect of it. It feels great.”

She has participated in a major marathon every year since adopting the sport, preferring to participate in fall marathons to allow for training in the spring and summer. Her first marathon was the Marine Corps Marathon in Washington in 2015. She also ran the Chicago Marathon to support the American Liver Foundation after her uncle died of liver disease. Last year, Upalekar ran the New York City Marathon virtually in Boston, and she previously participated in the Baystate Marathon in Lowell.

“A couple of my friends who share my passion and I saw that the Boston Marathon decided to go virtual,” she explained. “I thought this would be a great way to run something so elite, and I get to do it here.”

The rescheduling of the race from April to October due to the pandemic worked perfectly into her training schedule. She will use the money she raises (secure.teamaidasha.org/donate/#/runner/445) to help India as part of Team AID Asha.

“India is going through a really hard time,” she said, citing the shortage of vaccines and areas of poverty. “I want to use whatever money I raise to give back to India.”

She moved from India to Milford in 2002 and settled in Hopkinton in 2016. For the past 15 years, she has worked at Dell EMC on South Street, where her husband also is employed.

There are several places locally where Upalekar enjoys running. Her favorite is Minuteman Park in Concord, because the trail has historical markers citing American Revolution history with panoramic vistas. In town, she runs on the Center Trail.

She advised prospective runners to make sure they are well hydrated and eat a proper diet. Also, don’t be afraid to take the first step, she urged.

“If I can do it, anyone can to it,” she said. “I want to use everything I have learned over the past years to educate others. For people who have doubts, it’s all about perspective.”