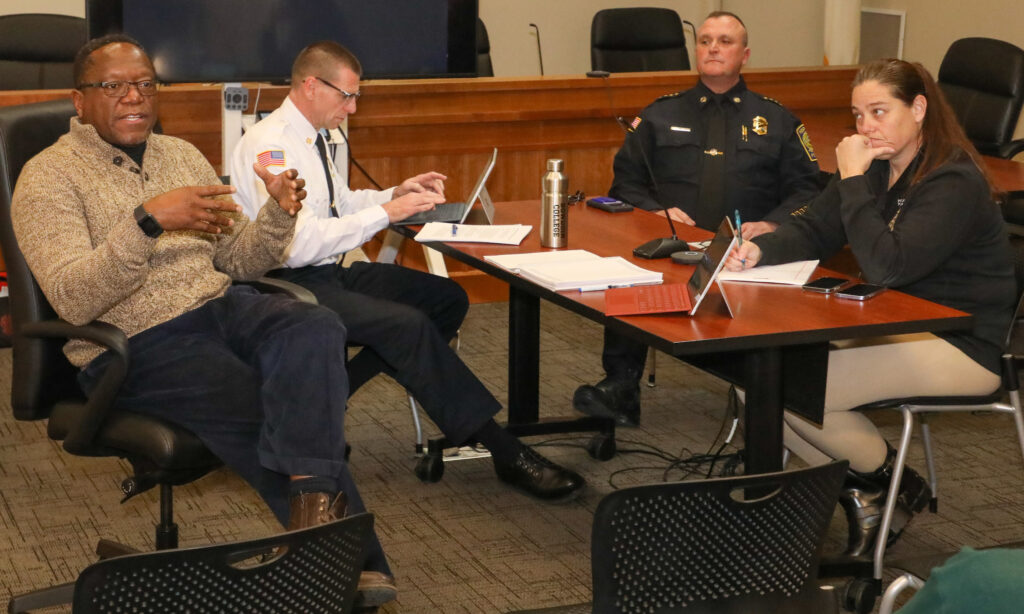 More than 20 people met with town officials Tuesday afternoon in a one-hour hybrid meeting to hear the pros and cons of Hopkinton potentially joining a regional emergency communications center (RECC).

For those on Zoom, the meeting was marred by poor sound quality, with nine online participants struggling to hear much of the early part of the meeting in particular. One person left the meeting because of this issue.

Town Manager Norman Khumalo explained that the decision to include Hopkinton in a regional dispatch center with Grafton, Southborough and Westborough was going to be decided on improving efficiency rather than because of the potential savings of hundreds of thousands of dollars.

“The input from the public is important in this process for many reasons,” he said. “It’s a topic that we’ve been discussing for a while. Any process that will make the system more efficient and save taxpayer dollars is a good one.”

Added Khumalo: “At least for me, my priority is not saving money.”

He noted that Hopkinton currently receives emergency assistance from surrounding towns — and provides it — when needed.

Residents at a recent Select Board meeting raised concerns about safety and the lack of understanding of community dynamics if public safety officials responding to an emergency are not from Hopkinton. These concerns resurfaced throughout this meeting, as well as whether the quality of service would decline.

A feasibility study was released at the September meeting, but one resident said that public information about it has been sparse since that time.

Fire Chief Bill Miller voiced support for the RECC, saying that his lieutenants also were in favor. When questioned as to how the firefighters in the field felt, he said that they tend to relay their thoughts to their lieutenants but could be asked for their opinions.

Currently among the four towns, there are 25 dispatchers. One Hopkinton Police Department employee pointed out that her understanding was that “everyone would be laid off and have to apply for the job.” Ten of the current dispatch positions would be cut permanently, she said.

“We have been building a rapport with the community,” she said. “How is it going to be better if we lose our jobs?”

“We don’t really have control over the staffing,” said Select Board Member Muriel Kramer in response. She noted that she attended a tour of a current RECC center the previous day to gain a sense of how it operates.

Khumalo said that the people who are let go will find “new roles” in their respective departments.

One benefit to the RECC system, he added, is that “more people will be working during major events.

While Miller gave an emphatic “yes” for the RECC, Police Chief Joseph Bennett was not quite as vocal in his endorsement.

“I would just like to say that I’m really proud of the work that our communicators and police officers do,” he said. “I’m proud of the collaboration among them and the way that they step up and support each other. As your chief, you make that decision. Whatever you ask me to build, I will.”

Asked whether emergency calls are expected to increase, Miller noted that there were 2,512 emergency calls in 2022, which he described as “the busiest year ever.” Over the next two years, he anticipated that calls would average between 2,600 and 3,000.

What was of particular concern to Miller was the increase in back-to-back calls over 15-, 30- and 60-minute intervals, he said, which “happens daily and weekly.”

A RECC system would help “get resources moving quicker,” Miller said, because it would “cut down on the phone time” for each call.

He added that he observed at the RECC center toured Monday night that calls were dispatched “within 45 seconds.”

The feasibility study addendum points out that Hopkinton’s current technology is 30 years old, with coverage dead spots in town, leading to a question about where the money will come from to update it.

Communications Director Meaghan DeRaad said the grant Khumalo referenced was a competitive grant, and that approval was not guaranteed. She also said that if Hopkinton were approved for the RECC but the town later decided to opt out, it was her understanding “that the town would have some financial responsibility.”

Miller gave the example of Holbrook, which owns its RECC and is responsible for all of the maintenance and repair of the equipment for all communities included.

Khumalo said he has been told by the state that all current RECCs have been successful in their applications.

Toward the end of the meeting, Pat O’Brien, a former Hopkinton police officer, noted that mutual aid is provided by the closest surrounding towns currently. Miller said that the “closest available resource” would be used with an RECC.

A future step, if the idea moves forward, would be to select a site for the RECC, said Khumalo. This would be determined by the towns involved. Initially, seven communities were included in the feasibility study, but the number was narrowed to four in an amended version.

At a recent Select Board meeting, the former Center School across from the Town Common was floated as a possible location. Meanwhile, Westborough officials have identified a building on the site of a former Superfund site (contaminated land) on Otis Street and have expressed an interested in having the headquarters there.

Another information session will be held Wednesday from 6-8 p.m. at the Hopkinton Senior Center. It will be available virtually.