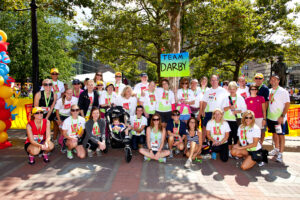 Team Darby poses for a photo during a prior Jimmy Fund Walk.

Darby Stott was a dear friend of Hopkinton resident Patrick Sansonetti, graduating Marian High School in Framingham in 1989 and Holy Cross four years later. When Stott died after battling a second round of metastatic breast cancer in 2014, Sansonetti took on the cause his friend cared most about — raising money for cancer research through the Boston Marathon Jimmy Fund Walk.

Team Darby, which was honored in March for raising more than $1 million during its eight-year existence, is gearing up for the Jimmy Fund Walk, which will be held virtually on Oct. 3. Team Darby is the 12th team to reach the $1 million mark in the walk’s 33-year history.

“This has now become her legacy,” Sansonetti, a Team Darby co-captain, explained. “Many of her friends from high school, college and work, and of course her family, take part. Even people who didn’t necessarily know her have become part of the team.”

He noted that raising more than $1 million is “very substantial for a team that does not have a corporate sponsor.”

“Darby wanted to give back to Dana-Farber because the people there had done so much for her,” Sansonetti said. “Not just the care they provided, but also the support she needed. She was such a great friend, so supporting a cause that she was so passionate about was an easy decision.”

Stott was diagnosed two days before Christmas 2011 when she was 40 years old, according to the Breast Cancer Research Foundation. She went through surgery, radiation and chemotherapy and, after a year of treatment, was thought to be in remission. When she died in 2014, it had recurred, spreading throughout her body.

Stott was honored by the Jimmy Fund prior to her death by being chosen to give the keynote speech at the annual Boston Marathon pasta dinner the night before the event in 2014, Sansonetti said. This was when she announced she would not be able to participate in the walk because the cancer had metastasized.

“So many people were touched by that that they ended up getting involved, either from a contribution standpoint or from a walking standpoint by joining the team,” Sansonetti said.

Prior to her second diagnosis in 2013, Stott had run the marathon “a couple of times,” Sansonetti said. She died shortly before the 2014 walk.

“She took a liking to the walking part and decided to create a team to raise funds for her doctor and the whole metastatic breast cancer unit,” he added. “The walk usually takes place along the same route as the marathon, but it was held virtually last year and will be this year.”

Sansonetti has been a Hopkinton resident for the past 15 years and previously lived in the town during the 1980s, attending Grades 4-12 here.

“The Marathon is a special day in Hopkinton,” he said. “And of course, it is unique to our town.”

Added Sansonetti: “When I was a Boy Scout, we would all be in a van and pick up the trash behind all the runners. Another time we set up speakers along the route. We got out there at 6 a.m. and set up a speaker every mile or so.”

Sansonetti added that Stott’s oncologist, Eric P. Winer, has participated in Team Darby events in honor of her and her commitment to fundraising for research.

Said Sansonetti: “Darby is one of the patients that I think he will always remember. He told a lot of funny stories about her, and I think they had a special relationship.”

Sansonetti said he enjoys participating in the walk every year, calling it “meditative and cathartic” as he remembers Stott along the route.

He is actively looking for participants and welcomes donations to the effort. More information is available at the event’s website at JimmyFundWalk.org or by phone at 866-531-9255.