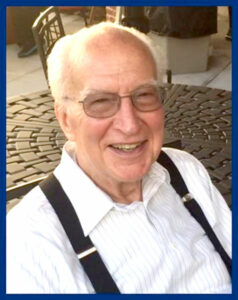 Richard E. Hathaway, 89, passed away peacefully on June 5. Known to all as Dick, he was born on June 20, 1929, in New Bedford, and was the son of the late Edwin R. and Velma S. Hathaway. He is predeceased by his sister, Jean.

Dick graduated from Worcester Polytechnic Institute with a degree in mechanical engineering and subsequently moved to New Jersey where he met and married Marilyn in 1955. They designed and built their home together and raised their family in Mendham Township, New Jersey. After living in that home for 59 years, they moved to Brightview Senior Living in Randolph, New Jersey, in 2016. Dick and Marilyn moved to Fairview Estates in Hopkinton in December of 2018, where Marilyn currently resides.

While in New Jersey, Dick began his career working for larger firms prior to starting his own company specializing in bakery equipment design. His favorite activities included sailing on the weekends and spending time with family and friends. His quick wit and humor will be sincerely missed.

Funeral services were under the care of the Matarese Funeral Home in Ashland (mataresefuneral.com). In lieu of flowers, donations in Dick’s memory can be made to the Alzheimer’s Association, Massachusetts Chapter, 309 Waverly Oaks Road, Waltham, MA 02452.