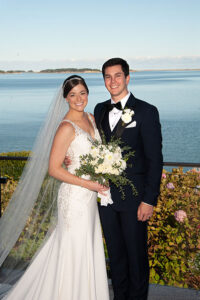 Katherine Margret Richardson and Paul Amandus Weinand were married on Oct. 19 at St. Joan of Arc Church in Orleans. The Reverend William Rodrigues officiated the ceremony. Kate is the daughter of Terry and Sharon Richardson of Hopkinton. Paul is the son of Dieter and Nancy Weinand of Pennington, New Jersey.

After a reception at the Wequassett Resort and Golf Club in Harwich, the couple spent their honeymoon in Moorea and Bora Bora. They recently relocated to Cambridge.