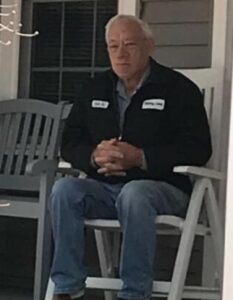 Robert James Hamilton, 77, of Moultonborough, New Hampshire, passed away on March 19 after a period of declining health. He was the beloved husband of Sheila Hamilton, and was raised in Hopkinton by the late William and Evelyn Hamilton.

Robert, better known as Bob, attended Babson and graduated from Northeastern University. He had an interesting professional career that started with the book publisher Laurette’s and concluded as the general manager for Ob-Gyn Associates of Rhode Island. When he “retired” in 2010 Ob-Gyn Associates had grown to become Rhode Island’s largest and premier OB-GYN clinic.

Bob never “retired.” In addition to his professional career, Bob loved hard work. After he and a friend clear cut their house lots in Southborough, he was inspired to start H&L Firewood. He went on to have a successful career as a part time lumberjack for 10-plus years! In later years he supported both Bob Jr. and Tom in their car business, towing cars and handling paperwork. Yes, he was transporting cars a few months ago!

Other accomplishments included completing three separate addition projects on three different houses, building a two-story barn, and countless roof and porch projects! His commitment to helping friends and family didn’t stop there, as he was a proud Mason and a member of the John Warren Lodge of Hopkinton. We will all certainly have stories about how Bob was always willing to lend a hand; that is how he would want to be remembered.

A graveside service was held March 26 at Southborough Rural Cemetery, with the Hon. Rev. Dennis J. Robinson officiating. Services were under the care of Morris Funeral Home, Southborough.

In lieu of flowers, the family requests that you consider both donating a tree and planting one yourself. God knows he cut enough of them down!

← Letter to the Editor: ‘My dream for peace’ Agustina Gonzalez, 79 →