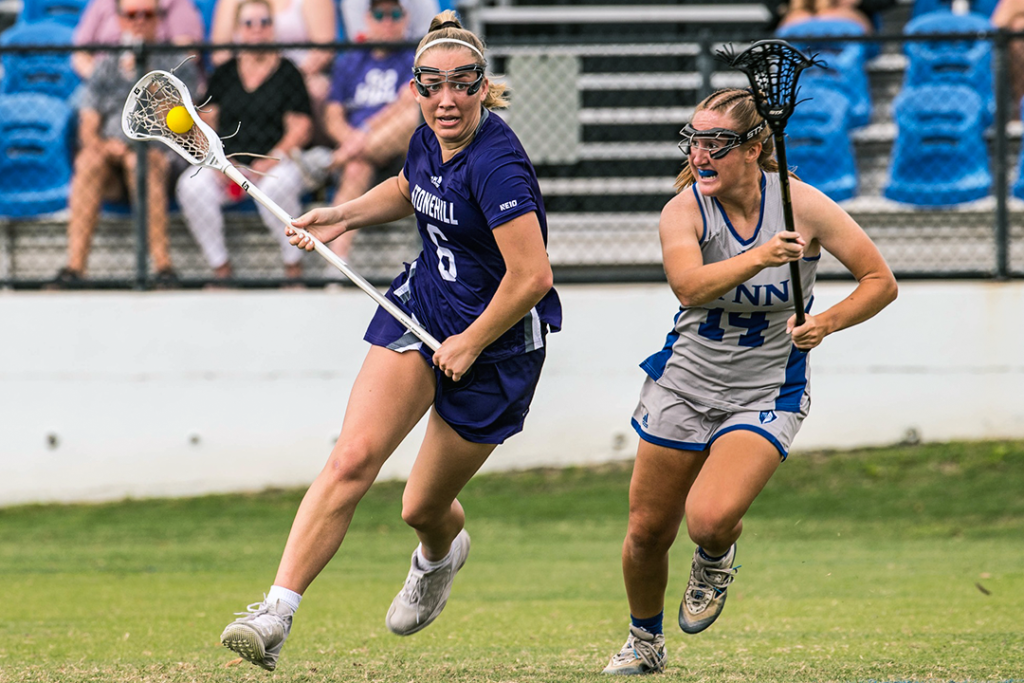 Lydia Rudden led the Stonehill lacrosse team to a top-10 ranking and into the Division 2 NCAA Tournament with a record-setting season. PHOTO/CRYSTAL ANN PHOTOGRAPHY/STONEHILL ATHLETICS

Lydia Rudden is finally getting the chance to play in a normal college lacrosse season, and the Stonehill junior is making the most of the opportunity. Rudden, a Hopkinton High School graduate, has been nothing short of dominant for the Skyhawks this year, earning a slew of Northeast-10 Conference accolades. But she’s mostly just happy to be playing.

“My freshman and sophomore years for lacrosse were not normal at all,” Rudden said. “I think I only played in three or four games freshman year, and last year we got cut short again.”

Added Rudden: “It’s nice to have this whole year be normal to see what it’s like to play college lacrosse — which is funny to say as a junior.”

Rudden garnered all-Northeast-10 (NE10) honors for the first time in her career after being named to the all-conference first team and being recognized as the conference’s Attack of the Year. She won NE10 Player of the Week honors four times this season and was named the IWLCA Division 2 Offensive Player of the Week twice.

Rudden amassed more than 100 points, just the third time that’s happened in Stonehill program history, and led the conference in scoring by 22 points. The eye-popping numbers include 68 assists in 19 games — a program record — and her 41 goals ranked fifth on the Skyhawks this spring. It’s no surprise she was named the winner of Stonehill’s Outstanding Junior Award at the school’s annual athletics awards night.

“It’s been an honor to get those accolades,” Rudden said, “just because the NE10 is such a strong conference and there are so many great players.”

She also has been a standout in the classroom. Rudden earned NE10 Academic All-Conference honors as a sophomore and has twice won the Saint Thomas Aquinas, Patron Saint of Students, Medal for having the highest cumulative grade point average on the team. She has been named to the NE10 Academic honor roll and Athletic Director’s honor roll every semester and received Academic Excellence status from the NE10 for having a 4.0 semester GPA.

Rudden’s on-field success has helped the team to a top-10 national ranking this year and a sweep of the NE10 regular-season and tournament championship.

“I don’t think we started out the season ranked and now we are eighth in Division 2, which is really amazing,” she said in early May. “We have worked so hard this season and our attack works really well together. Honestly, all of the members of the attack and myself are doing really well.”

The Skyhawks lost just twice in the regular season, and the campaign was highlighted with the program’s first victory over Adelphi in about two decades. Stonehill knocked off the then-No. 2-ranked program 14-13 in overtime behind a goal and a whopping seven assists from Rudden.

“It was the best feeling in the world to win that game,” Rudden said. “We were looking forward to that all season and it was such a great feeling because they are a really strong team.”

Rudden has her sights set on a deep run in the NCAA tournament this year, but she also is thinking about next year when she will be a senior during the start of the program’s transition to the Division 1 level and the Northeast Conference.

“I think that it’s going to be a year to adjust, but this year in particular has prepared us for it because of how competitive our games have been,” she said. “As a senior, my goal is to be a strong leader and help the team adjust to the new division.”

UPDATE, May 17: Since this story was written, Stonehill played two games the NCAA tournament, beating Mercy College, 18-17, in the first round, then losing to Adelphi, 13-11, in the national quarterfinals on Sunday. Rudden finished her season with 77 assists and 119 points, both school records.