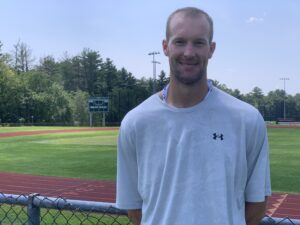 Mark Sanborn had a positive experience during his years as a three-sport standout at Hopkinton High School, and he wants the same for his players now that he is taking the reins of the Hillers football program.

“I enjoyed the experience of being teammates with guys I still hang out with today, the feeling of playing a game on Friday after grinding out a week of practice, there is nothing better,” Sanborn said. “I just hope I can provide that.”

Sanborn, 31, is stepping into his first varsity head coaching position. He has been an assistant coach for the Hopkinton varsity for the past three seasons, focusing on special teams and wide receivers. And he brings head coaching experience with the HHS junior varsity and freshman football teams as well as the JV baseball team and middle school basketball squad.

A lifelong Hopkinton resident, Sanborn played baseball at UMass-Lowell from 2009-12. Baseball, he said, was his first love. But a coaching opportunity in football is what led him to his current position.

“I volunteered as an assistant [shortly after college] and I instantly got hooked,” Sanborn said. “I fell in love with coaching and I was at a point where I wasn’t sure what career path I wanted to pursue. I thought maybe teaching was a route I wanted to take.”

After leaving the business world, Sanborn first worked as a long-term substitute, then a position opened up for a wellness teacher and Sanborn took it. This school year will be his seventh teaching at Hopkinton High.

“The best decision I made in my life was getting involved in education and coaching,” he said. “I feel so grateful.”

Sanborn takes over for Dan MacLean, who led the program for two seasons, including the modified “Fall 2” campaign this past spring in which the Hillers went 2-3. Sanborn said he’s excited to get the ball rolling with practices in late August, but much of his focus is long term.

“The idea of building a positive culture is really important,” he said. “We want the right attitude, effort, the values and morals that are really important to a football team and the commitment to the idea that football is a great teacher for life. There are so many skills you learn that prepare you for the rest of your life. So we want to represent the program the right way on and off the field.”

Athletic Director Rich Cormier said Sanborn’s familiarity with the program played into his being selected for the position, but he added that Sanborn is the right person for the job regardless of his past experience with the program.

“He is an awesome coach, he is great with our student-athletes, he has tremendous character and integrity, and he has the right values we want to demonstrate in our program,” Cormier said.

Cormier said he hoped Sanborn would be a “steadying influence” for the Hillers.

“We are very hopeful that Mark will be at the helm for many years, leading our football program,” Cormier said.

Asked about his coaching style, Sanborn said he is not a yeller and a screamer, but he does place an emphasis on strong fundamentals. Among his greatest strengths, he said, is his ability to get along with his student-athletes and make sure everyone is having a good time from the star quarterback to the last player on the bench.

More than anything, Sanborn said this is an opportunity to build a team and a program that has been important in his own life.

“This program means so much to me,” he said. “Getting involved with this program as a coach was one of the best decisions I have made in my life.”