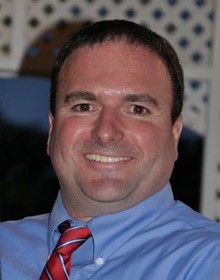 Stephen Michael Interrante of Franklin passed from this life on April 4.

Born in 1976 on the U.S. Navy base in Guantanamo Bay, Cuba, Stephen was the treasured son of Albert and Janice Interrante and the youngest of three children. Steve grew up in Medfield, where he made many lifelong friends and enjoyed numerous successes in competitive sports. After graduating from Medfield High School, he went on to study at Providence College, where his magnetic personality and easygoing nature expanded the circle of friends he would have throughout his life.

Steve graduated from Providence College in 1999 and embarked on a career in financial services while living in Somerville, Charlestown and the Back Bay. He loved his time with family and friends and was a central figure in annual camping trips, golf weekends, Wiffle ball tournaments, card nights, Sox games, European and cross-country trips and more, all while spending a significant amount of time as a devoted godfather and uncle to his nieces and nephews.

In 2009 he met Maura Sullivan, his future bride and the love of his life. Steve and Maura welcomed their first child, Annie Jacqueline, in 2012, followed by the 2016 birth of James William, who completed their beautiful family.

Steve was the devoted brother of Rebecca of Medway and Jason and his wife, Lisa, of Hopkinton. Uncle Steve shared countless memorable times with his nephews and nieces, Jack, Reese, Benjamin and Taylor. His passing also is grieved by the Sullivan family, Barbara and Bill Sullivan of Medfield and their children and grandchildren.

The Interrante and Sullivan families are deeply grateful for the support of family and friends as well as the compassion of Dr. James Cleary and the staff at the Dana-Farber Cancer Institute in Boston.

Stephen was a devoted and steadfast friend to many. He will always be remembered and treasured for his sense of humor, his strength of character and endless empathy for others.

A celebration of Steve’s life will be held at a later date when his family and friends will be allowed to gather.

As a gesture of sympathy, donations may be made to The Annie and James Interrante Fund on gofundme.com.

For the online guestbook, visit robertsmitchellcaruso.com.