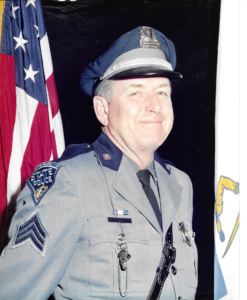 Thomas P. Brock, 82, a retired sergeant of the Massachusetts State Police after 28 years, died Oct. 13 at his home after a long illness. He was the husband of Marie Janet (St. Pierre) Brock, to whom he was married for 31 years. Born in Hopkinton, he was the son of the late Joseph and Eva (Hogan) Brock.

A 1957 graduate of Walpole High School, he held a bachelor’s degree from Northeastern University and a master’s degree from Anna Maria College. A veteran of the U.S. Army, he also worked for the Boston Herald.

He was a graduate of the National Fire Academy in Maryland and attended the Oklahoma State Police Commercial Trucking School. He enjoyed time spent at his home in Port St. Lucie, Florida.

In addition to his wife, he is survived by his sons, Thomas Jr. and William, his daughter, Maryellen, his devoted stepson, Jon Lachapelle of Beverly, his brother, Joseph Brock of New Hampshire, and several grandchildren. He was predeceased by his son Kevin.

The funeral will be held Monday, Oct. 18, at 9 a.m. from the Callanan Cronin Funeral Home. A funeral Mass will be celebrated at 10 a.m. in St. John the Evangelist Church. Burial will follow in St. John’s Cemetery. Calling hours at the funeral home are Sunday, Oct. 17, from 1-3 p.m. and 6-8 p.m.

Donations may be made to Hopkinton Fire-Police Association, 73 Main Street, Hopkinton, MA 01748.