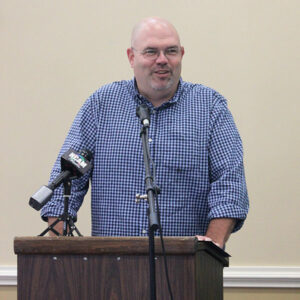 Longtime resident Brendan Tedstone was tabbed Select Board chair in May, shortly after being elected to the board for a second term.

Brendan Tedstone grew up in Hopkinton. Most readers of this newspaper know that. Most Hopkinton residents also know that when up for re-election in May, Tedstone received more votes than any other candidate for Select Board. Those who are well informed also are aware that Tedstone recently was voted Select Board chair. 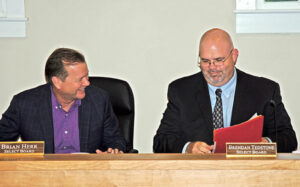 Brendan Tedstone, alongside fellow Select Board member Brian Herr, frequently expresses a desire to look out for the town’s senior citizens.
PHOTO/STEVE McGRATH

What most people are not aware of is how Tedstone, whose exploits include being a former minor league hockey enforcer and male nurse at a maximum-security prison, became the most prominent public official in our town.

As a teenager in Hopkinton, Tedstone (now 49) washed dishes at Carbone’s and pumped gas for Jerry Lazzaro at what is now the Hopkinton Sunoco.

“He was always a jokester, always had a big smile,” Lazzaro recalled. “The customers loved him, especially the senior citizens. He had a good way with people, but you would never think he would end up running the town.”

Tedstone is a grandson of Thomas Terry, who owned the land upon which Hopkinton High School and the athletic fields are situated as well as what is now the Hopkinton Center for the Arts, He and his brother, Luke, had a modest upbringing, raised by their mother, Carol Terry Tedstone, who divorced when Brendan was 12. Tedstone attended high school at Keefe Tech in Framingham, graduating in 1988.

He could have been dealt a better hand of cards, but he never complained.

“Through it all my mother raised us to know right from wrong and how to make good decisions,” Tedstone said. “I made a lot of friends in our neighborhood, who turned into lifelong friends. We just decided to make the best of it.”

When Brian Thomas was a star for Dave Hughes’ HHS football squads in the early 1980s, Tedstone was their 11-year-old water boy.

“He was always a smart kid, very witty,” said Thomas, now the owner of Phipps Insurance Agency. “He would introduce his own brand of humor into every conversation.”

Tedstone’s trademark humor was on full display when he first announced his run for selectman three years ago. He mockingly claimed that if elected he would “make Hopkinton great again” and that he would “build a wall and have Ashland pay for it.” Those who know Tedstone knew he was kidding. It was just Brendan being Brendan. Not everybody understood, but Tedstone did not care.

Tedstone, an independent, said he was first inspired to run for public office when he was concerned about how the town was handling the search for a fire chief.

“Initially, when Ken Clark was stepping down as fire chief, I watched with interest as our town conducted a nationwide search,” Tedstone said. “It was obvious to me and lots of others who know what is going on in Hopkinton that our best option was our own deputy chief at that time, Steve Slaman, a local guy that knows our town. I said to myself and anyone who would listen, this is ridiculous, someone has to do something.”

Shortly after Tedstone won his first election, Slaman was appointed fire chief. He continues in that role today and is doing a great job, according to Tedstone.

While Tedstone continues to blend his comic style in almost everything he does (his email messages include “sent from my wall-mounted rotary phone”), Tedstone has surprised even his most ardent supporters with how seriously he takes his public service. He has constantly advocated for tax relief for Hopkinton’s senior citizens, especially those who are on fixed incomes and are struggling to stay in their homes. When Tedstone discusses the town’s budget and the need to increase tax revenue, amidst the crisis facing our seniors, there is no humor to be found in his comments.

“Lets face it,” he said, “the Legacy Farms thing has left the town with a mess.”

On another day Tedstone called our tax bills “a shell game.”

“On one hand we tell our residents that our tax rates will remain unchanged and then on the other we increase people’s valuations,” he said. “I consider this to be very deceptive and absolute nonsense. Taxpayers deserve the truth.”

When he discusses the town’s monetary woes, Tedstone demonstrates that he inherited something from the Terrys: the ability to acutely assess complex financial situations while fully understanding the motives and representations of the parties involved. At a recent meeting Tedstone proposed a means of sparing seniors and disabled veterans from what otherwise will be an inevitable 35 percent increase in their water and sewer bills, all with a very straight face. Tedstone has never been afraid to say what he thinks.

“Sometimes my mouth gets me in trouble,” he said, “but I believe I am dealing with the facts and trying to be as reasonable as I can be.”

Tedstone has had some dustups, including a highly contested discussion about renaming the Board of Selectmen to what is now called the Select Board. His detractors called him sexist and out of touch. Tedstone claimed he is simply a traditionalist. When the debate escalates and the conversation gets heated, Tedstone thinks the way former construction company owner turned town official Don Wilson did: Just because you may disagree with someone on one issue should not prevent you from working together on things you agree upon.

Tedstone knew Wilson as a kid, and like most effective politicians, he knows his history. Tedstone learned much of what he knows at places like The Spoon (formerly the Golden Spoon) over the last 30 years.

Tedstone, who lives near the center of town with his wife and two children, has always been different from the rest of us. Most people don’t like public speaking. Very few could stand the commitment and pressures of elected office. How many could tolerate the verbal abuse he received as a male nurse in a prison full of murderers? How many would take a job as a minor league hockey goon? To know Brendan Tedstone is to know that he is fearless, and he loves the action.

“I always like to make things fun, but when game time comes, there is no time for humor,” he said. “I love game time.”

Lazzaro, who has known Tedstone since the days of Ronald Reagan, said there is much more to Tedstone’s public service than being a budgetary wonk.

“When Brendan was a kid, he got to know a lot of the respected leaders of our town, people like Cookie Kumlin and Tommy McIntyre, they did a lot for the town and they made quite an impression on Brendan. Now they’re gone and Brendan has picked up the torch.”

Summing it up, Thomas perhaps put it best: “Brendan is one of the funniest people I have ever met, but as I have watched him mature, it is clear that he cares deeply about the town. He’s going to live and die here. He has the intelligence and empathy to understand the issues and lives of ordinary people. He gets it. We’re lucky to have him.”