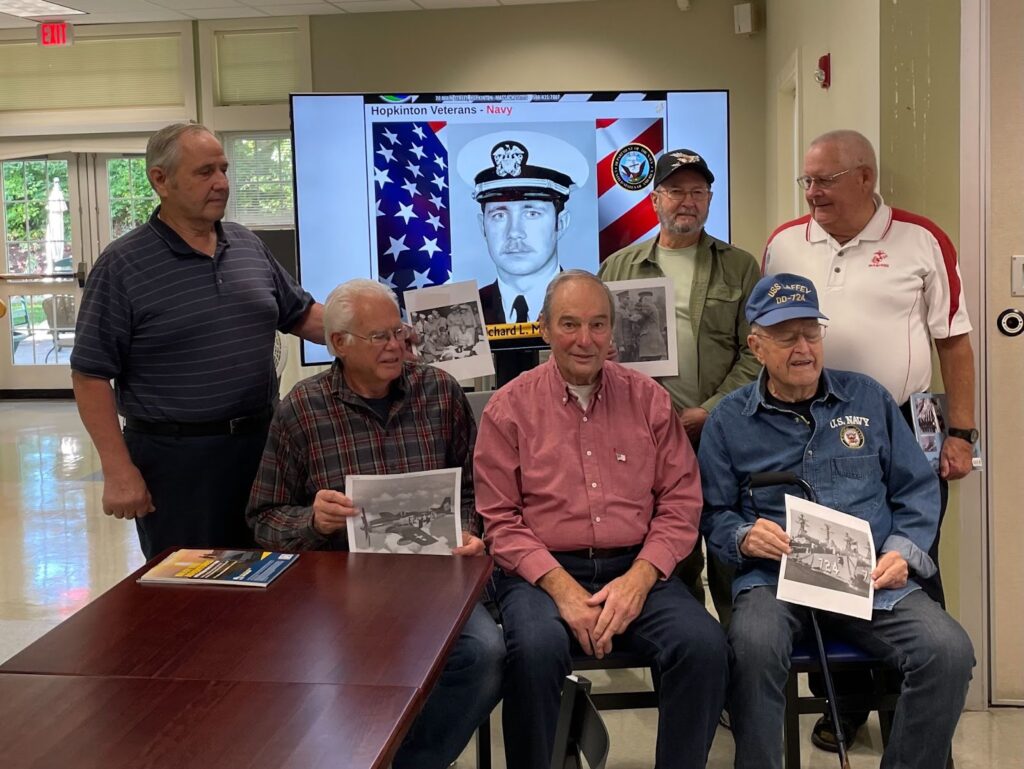 Among those attending the Oct. 7 Veterans Breakfast were (from left) Art Brooks (Navy), holding a photo of Rear Admiral Sakaibara signing surrender documents of Wake Island to the Allies (Sakaibara was the same official who, in 1943, ordered nearly 100 Americans massacred); Gordon Winston (Air Force), displaying a “Mustang” fighter that represents the only propeller-driven airplane to shoot down two jet-propelled German Messerschmitts in 1944; Hank Allessio (Army); Bob Letendre (Army), showing Major Charles Whittlesey receiving the Congressional Medal of Honor for leading the “Lost Battalion” in the Argonne Forest during WW II; Jack Westcott (Navy), with a photo of the USS Laffey (DD-724) that was known as the Ship That Would Not Die after surviving six kamikaze crashes in 1945 during the Battle of Okinawa in WW II; and Bill Krans (Marines).

“Do you remember when?” was the main theme of the cordial — and tasty — Veterans Breakfast enjoyed by dozens of local veterans on Oct. 7 at the Hopkinton Senior Center. A solemn remembrance was offered for recently deceased veterans, as well as an acknowledgement of veterans currently on “sick call.”

The next scheduled Veterans Breakfast is Nov. 4, which is near the date of the U.S. Marine Corps’ birthday on Nov. 10. On Veterans Day, Nov. 11, there will be the annual Veterans Day ceremony during the day and the Hopkinton Veterans Appreciation Dinner in the evening.