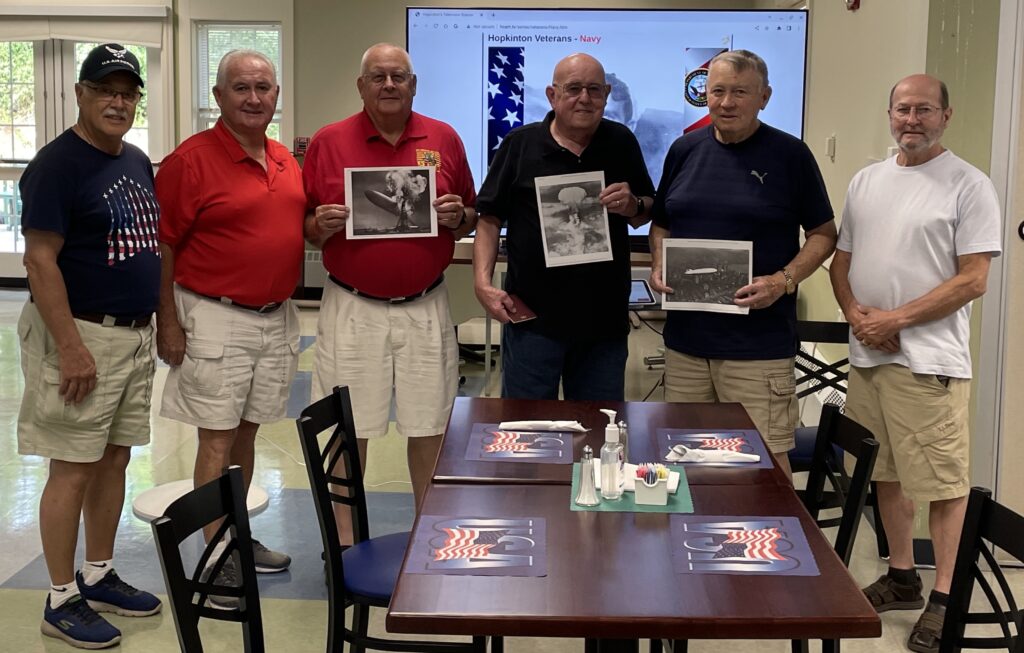 Among the many attendees who contributed to the discussion at the Aug. 5 Veterans Breakfast were (from left) Al Monfreda (Air Force), Rick Ferguson (Marines), Bill Krans (Marines), Ken West (Air Force), Dick Gooding (Army) and Bob Letendre (Army). The photos are from the Hindenburg disaster.

Remembrances of past military events are what keeps the attention of veterans at the monthly Veterans Breakfast at the Hopkinton Senior Center. Early August throughout recent history seems to be especially memorable; e.g., in 1917, the entire National Guard was conscripted for World War I; in 1936, the German hot air balloon Hindenburg met a fiery death in New Jersey, losing many passengers and crew; in 1945, Hopkinton USAAF members were at hand when “Little Boy” departed Tinian for a critical bombing of Hiroshima, Japan; in 1964, carrier-based aircraft flew from the USS Ticonderoga and USS Constellation in 64 sorties against North Vietnamese coastal targets in response to the Gulf of Tonkin incident.

Recently departed Edward O’Leary (Army) and William Macmillan (Navy) were specifically remembered. Quotations by Richard Brault (Marines) were read to the eager listeners as all learned about Brault’s occupation of Japan duty just weeks after the bombing of Nagasaki.

The next Veterans Breakfast is scheduled for Sept. 2, along with a van trip to Battleship Cove (pre-registration is requested).