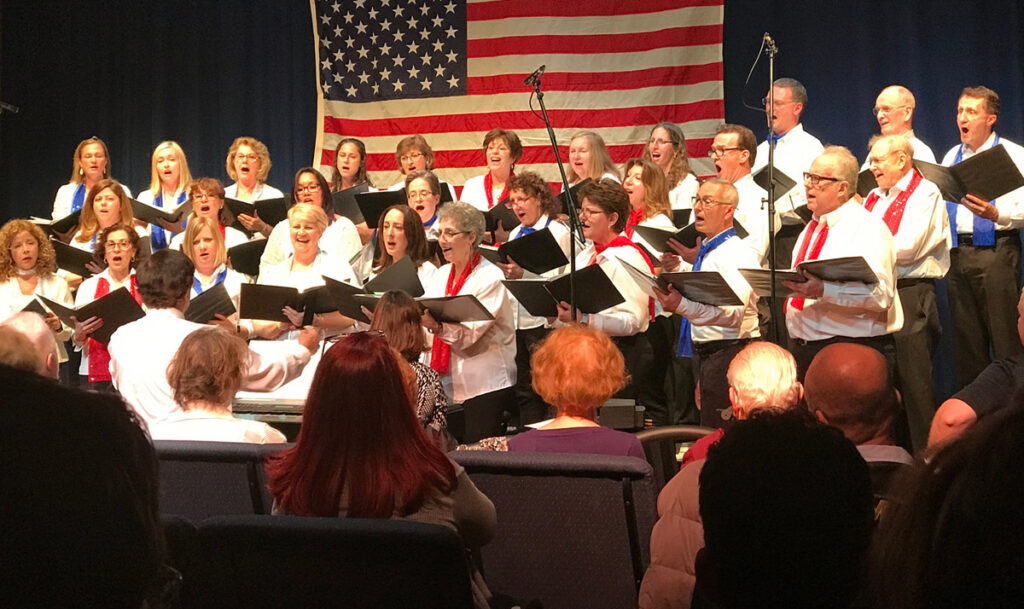 The Treblemakers adult chorus performs at various functions in the community. PHOTO/HOPKINTON CENTER FOR THE ARTS

A chorus that strives to create a community of singers and be part of the community that surrounds it, the Treblemakers are set to start their 15th year of making music together.

“We invite all singers to come down and have some fun with us,” said chorus member George Reimonn. “Our unofficial motto is, ‘Y’all come sing.’ ”

Noting the adult chorus, part of the Hopkinton Center for the Arts (HCA), creates its own community of singers, he added, “While making music is its own reward, we feel that it is fun to get together to sing. There is a strong social aspect of the chorus, and our rehearsals are fun. We do the performances at the end of season as a bonus.”

Chorus director Eric Miller reinforced that feeling, saying, “I try to make our rehearsals interpersonal. They are fun, light and, while everyone has high expectations, there is a lot of support for all the singers.”

Miller is the HCA’s director of music, a middle school choir director in Holliston, and a teacher of sight-singing, aural skills and music theory for Noel Smith Voice Studio. He provides a strong educational experience for chorus members who want to learn more about music and singing or develop their skills.

The Treblemakers also are an important part of the Hopkinton community. Founded in 2007, the chorus met on the second floor of a Main Street restaurant in town and soon became affiliated with the Enter Stage Left (ESL) Theater group, since many members belonged to both organizations. “We have a lot of gregarious actors who are gregarious singers in the chorus,” said Reimonn. He noted as ESL became more organized and worked more closely with the HCA, the Treblemakers followed along. Now part of HCA, the chorus rehearses in the center’s barn and performs in the Delbridge Family Performance Space.

With their theater background, the singers primarily focus on performing show tunes. “Last spring, in our first concert after a shutdown due to COVID, we performed tunes from Tony award-winning musicals,” said Reimonn. He noted all the concerts have “a very musical theater focus” and the group performs “in a high-energy, showy style, even singing some show tunes at Christmastime.”

Before the COVID interruption, the chorus would take its concert music, pre-performance, on the road, singing at local nursing homes. “We hope to do the same again this season,” said Reimonn.

The Treblemakers also lead a carol sing-along on the Hopkinton Town Common during the community’s holiday festivities and often perform their special four-part harmony rendition of “The Star-Spangled Banner” at town and sporting events. “There is a huge community element in the Treblemakers,” said Miller. “While the music is important, being part of the community is also huge.”

The Treblemakers are seeking singers of all voice types, age 18 and older, to join their first rehearsal of the fall season on Wednesday, Sept. 7, at 7:30 p.m. at the HCA (98 Hayden Rowe Street). No audition is needed, and singers do not need to be able to read music. New singers may attend the first two rehearsals for free each season before paying the membership dues of $150. Members are asked to show proof of COVID vaccination, since all rehearsals and performances are done without masks. Rehearsals are held each Wednesday from 7:30-9:30 p.m.