After 20 seasons with HHS volleyball program, Grabmeier goes out on high note 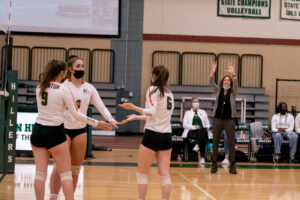 After leading the Hillers to the state title game, Margie Grabmeier (right) is retiring as HHS volleyball coach following a 20-season run with the program, including 18 years as head coach. PHOTO/CHRISTINE STRICKLAND

Two decades ago, Margie Grabmeier noticed an ad that kept popping up in a local newspaper soliciting a freshman volleyball coach at Hopkinton High School. The local resident had experience with the sport, having played both during her high school days in Connecticut and for a season at the University of Pennsylvania.

“I thought, ‘They seem like they really need someone, maybe this is something I could help out with,’ ” Grabmeier recalled. “I had no idea it would become such a huge part of my life.”

Grabmeier spent just a couple of weeks with the program before being elevated to the junior varsity level. Two years later, she became the varsity head coach, eventually leading the Hillers to a pair of state championships, two undefeated seasons and more than 300 victories — as well as this Saturday’s Division 2 state championship match.

As has been the case for many since the start of the COVID-19 pandemic, Grabmeier’s life has taken some unexpected turns. Her children are grown and her husband no longer needs to commute to an office, so the couple left their Hopkinton home and moved to their second home in Falmouth full-time. The commute is part of the reason why Grabmeier is stepping down after 20 years, but this particular team also provided a good opportunity to finish on a high note.

“Twenty years seemed like a good, round number and I was thinking I would be able to hit 300 [wins], which the team did relatively quickly this year,” she said. “There are also a lot of seniors on this team, and half of them have been on the team since sophomore year. It’s a great group, and I felt like I wanted to go out with them.”

The Hillers rolled through the regular season undefeated this year, the second time the program has accomplished that feat during Grabemeier’s tenure. Hopkinton won the Division 2 state championship in 2014 and 2016 and, after being bumped up to Division 1, made yet another run to the state final in 2017 before losing.

The victories are memorable, but when Grabmeier thinks back on the highlights of her career, she also recalls team trips to Florida in 2006 and 2015, the first time the program went to a sectional final, and participating in — and winning — the Hall of Fame Tournament in Springfield this year.

“That was our first time going to that tournament and we won it,” she said. “That was pretty exciting.”

“I’ve been very fortunate to work with Margie over the past three years and to witness her unwavering commitment to her students and to the volleyball program as a whole,” he said. “She has won over 300 matches, but that’s not what makes her so special — it is all the little things she does that has created a culture that values teamwork, inclusion, sportsmanship, community, character and a commitment to excellence. To say we will miss Margie is an understatement — she is Hopkinton volleyball, but she has also left the program in a great position to remain successful thanks to her program building and involvement with the youth.

Added Cormier: “We were beyond lucky to have her!”

Grabmeier has fond memories of doing arts and crafts with her players, face painting, holding youth clinics, and watching her current teams help school the younger girls who would become the program’s future. When players graduate, they often come back to see Hopkinton play, she noted.

“I love it when I see the alumni coming into the gym and cheering on the current team,” Grabmeier said.

She’s enjoyed all of the players she’s had the chance to coach, but two stand out in particular. Maggie Grabmeier played for her mother from 2007 through 2009, and younger sister Angie Grabmeier was part of the program from 2016 through 2019, winning a state title as a freshman and making a run to the state final the following year.

“Having the opportunity to coach my two daughters, that was special to have that extra time with them on the court,” Grabmeier said. “I was able to share one of my passions with them.”

While she will not miss the commute from the Cape, Grabmeier said she will miss the people she’s had the chance to work with, from the players to fellow coaches, to fans and parents, and even the local media that has covered the program.

“It’s the relationships that I will miss the most, without a doubt,” she said. “Volleyball is a fun sport, it really is, but I coach because of the people.”