A Boston Marathon turned virtual has not kept a pair of Hopkinton moms from continuing to train and fundraise for youth sports as if they’d be running down Boylston Street this fall.

Ali Balster and Amy Dorfman are running to raise money for Hopkinton Boys Youth Lacrosse and Hopkinton Girls Youth Lacrosse, respectively. The friends have weathered the emotional swings of seeing the race moved from April to September due to the COVID-19 pandemic before the real event was scrapped altogether in favor of a “virtual” experience.

“It’s been a mixed bag of emotions,” Dorfman said. “Getting the bib, pre-COVID, was so exciting. Once some of the major marathons started getting canceled around the world I thought, ‘Oh, no.’ There was some disappointment, but the pandemic was so scary I felt like I didn’t have time to be disappointed.”

Dorfman ran Boston in 2018, but the torrential downpours that year kept the crowds to a minimum. She said she hoped her 2020 entry would be rolled over to 2021. When this year’s race was replaced with the virtual event, Dorfman felt like she had the experience of running Boston taken away once again.

Balster ran Boston in 2014 and said she hopes this year is not her last chance to take part in one of the world’s most renown races.

“I really don’t want this to be it, I would like to run another ‘real’ Boston,” she said. “This feels like it’s Boston, but it’s not really Boston. But a marathon is also a really big commitment.” 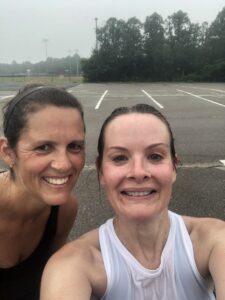 Both women are keeping their commitments to the youth sports programs and to each other to finish strong this year. With Balster spending some time quarantining in New Hampshire and Dorfman doing the same on Cape Cod, they have not been able to run together frequently. But they’ve solicited donations together through social media posts and offered each other encouragement throughout the training process.

“It’s been so good to share this with her,” Balster said. “In my experience no one wants to hear about your running like someone who is doing it with you. It’s a bit boring to talk about unless someone is in it with you.”

The pair will be in it together through race day, although it’s still unclear exactly what that day will look like.

“Ali and I kind of both went to the respective boards of the organizations we are supporting and we said, ‘This is our plan, we are going to do the virtual race,’ ” Dorfman said. “We had decided together we would stay away from the course and run it through Hopkinton with the hope we could get some of the youth players to cheer us on and maybe leave us some water along the route.”

She added, “We are hoping to get them involved a little bit so it’s not just her and I trekking through Hopkinton.”

The Boston Athletic Association indicated participants must complete a marathon on a day between Sept. 7-14 and provide proof in order for it to be considered official. The women have tentative plans to run on Sept. 11.

“I plan to run with Amy and there are a couple of other Hopkinton runners,” Balster said. “We will start early and just get it done.”

They also will continue to make progress toward their $5,000 fundraising goals. Dorfman said she wanted to support the girls program because her middle school daughter has had such a positive experience. She also has sons who have taken part in the boys lacrosse program. Balster has a son in the boys program and was approached by the organization about running Boston for its benefit, an opportunity she eagerly accepted.

“Hopkinton boys lacrosse has been great. I started strong on fundraising, but with everything going on in the world I have sort of backed off a little bit,” Balster said. “It feels hard to ask people for money right now, but I am still gratefully accepting donations and getting my runs in.”

Dorfman also is accepting donations and, before the pandemic set in, put together a fundraising event. Although the experience is not what she thought it would be the day she received her bib, she said she is looking forward to seeing it through with Balster.

“We are good friends,” Dorfman said, “and we both love to run.”