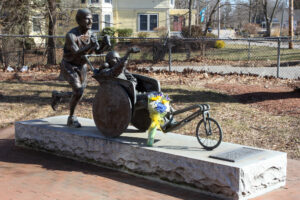 Flowers sit on the statue of Rick and Dick Hoyt in front of Center School on Wednesday following the announcement of Dick Hoyt’s death. PHOTO/JOHN CARDILLO

Dick Hoyt, who inspired millions by pushing his son, Rick, in a wheelchair in 32 Boston Marathons and other races across the world, died Wednesday, according to multiple reports. He was 80 years old and had been dealing with health issues for a few years.

There is a statue of Team Hoyt in front of Center School. The duo made appearances in local schools to share their inspirational story and previously held a road race in town to raise money for the Hoyt Foundation.

“Dick and Rick Hoyt had a real and heartfelt connection to Hopkinton and the feeling was mutual,” said 26.2 Foundation executive director and Hopkinton resident Tim Kilduff. “I’ll remember that connection every time I walk past the Team Hoyt sculpture in front of Center School just a few feet from the Boston Marathon start line, a place that meant so much to Dick.”

In a statement, the Boston Athletic Association said it was “tremendously saddened” to hear of Hoyt’s passing. “Dick personified what it meant to a be a Boston Marathoner, showing determination, passion and love every Patriots’ Day for more than three decades,” the statement reads. “He was not only a fan favorite who inspired thousands, but also a loyal friend and father who took pride in spending quality time with his son Rick while running from Hopkinton to Boston.”

Bryan Lyons, who in 2015 took over pushing Rick in the marathon after Dick retired, passed away last year at the age of 50.