Sean Farrell has been a high school hockey standout, an NHL draftee and a Division 1 collegiate star. Now the Hopkinton native will be called an Olympian. “It’s unbelievable, playing in the Olympics is so crazy and such a once-in-a-lifetime experience,” Farrell said. “I had an idea that it might be a possibility, but when my coach called me and told me it was official it was really special.”

Despite dealing with some COVID-forced schedule changes, Hopkinton High School interim wrestling coach Corey Mills said he’s thrilled to have the team competing again during its usual season after being moved to the spring last year. “The kids have really loved being back wrestling during the winter,” Mills said. “When we have been able to wrestle, it’s been a lot of fun.”

This week’s edition of the Police Log includes one arrest along with reports of a hit and run that left an injured man lying in the road on Ray Street, a man asking people for money on West Main Street, and a possible bat in a house.

The town’s Department of Public Works announced that the recycling center on Wood Street will be closed this Saturday due to the expected snowstorm. The monthly white metal collection also is canceled.

At its Tuesday night meeting, the Conservation Commission approved area resource delineations for 188 and 190 Fruit Street after the applicant explained that an intermittent stream was found running through the property upon it being surveyed.

Photo of the Day: Legacy Farms basks in a sunrise earlier this week. 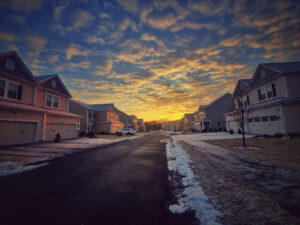