The town’s latest COVID-19 update, released yesterday, shows that there have been 120 total confirmed cases, with only five still active. There also is information on Phase 2 of the state’s reopening plan, which began yesterday. As part of the plan, many businesses, including restaurants, can reopen — with limitations. Also open with limitations are town athletic fields, although the school fields and playgrounds remain closed until the end of the school year on June 17. 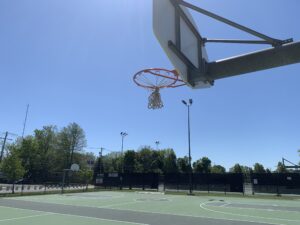 The nets at the basketball courts outside of Hopkinton Middle School remain tied up so they cannot be used. PHOTO/JERRY SPAR

The Water Department’s annual drinking water quality report, a consumer confidence report for the previous calendar year reporting period that is a requirement of the EPA, has been released. The report will be inserted in the June 17 issue of the Independent, and it can be viewed on the Water Department webpage (https://bit.ly/HopWater2019) and at the Water Department office, 66 Fruit St., from 7 a.m. to 3:30 p.m. Copies also can be obtained from Town Hall and the Hopkinton Public Library when they reopen.

The Conservation Commission meets tonight (6:30) via Zoom, although discussions regarding the two most debated proposed projects — the Frankland Road solar array and the Leonard Street development — have been continued to the June 23 meeting.

Video of the Day: An ailing baby pig is taken in by a sanctuary in Spain and enjoys its new life.

← Hopkinton COVID-19 update for June 8 Letter to the Editor: Coutinho 'shows up for everyone' →