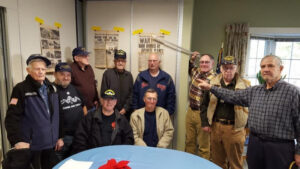 At their monthly breakfast in December, Hopkinton veterans remembered Pearl Harbor and other historic military events that happened on or about Dec. 7. The packed house of veterans began discussions by recollecting America’s declaration of war against Austria-Hungary on Dec. 7, 1917. This counted as the 13th country to similarly do so.

In many of our lifetimes, 68 years ago in North Korea, the epic battle of the “Frozen” Chosin Reservoir was deeply etched into history. At least three Hopkinton veterans — Gene Flannery, Bob Lavoie and John Long Sr. — experienced days on end of bitter cold of minus 30 degrees while thousands of Marines and soldiers struggled to stay alive and escape the enemy.  A hero of the escape from the Chosin was Gene Flannery, who was the gunner in the tank that led two Marine regiments southerly down the main (only) supply route to safety. Despite brutal firefights with the Chinese communist army along 14 miles of unprotected road, the majority of casualties were caused by frostbite.

Unforgettable are the happenings of Dec. 7, 1941, 77 years ago at Pearl Harbor, Hawaii.  Without doubt, this sneak attack by the Imperial Japanese military was a stark pivot point in American history. Losses of aircraft (188) and personnel (2459 KIA) are well documented. William J. Robinson of Hopkinton survived the Japanese attack. Citizens throughout the United States were bewildered and frightened.

Kathleen L. MacLennan, 95, was a college freshman in 1941. She recalls being with her classmates huddled around a radio listening to the shocking news, and hoping that a scheduled exam for the next day, a Monday, was going to be canceled. The test was not canceled!

Cristo H. Mastrogianis was 6 years old, living in Salem, listening to the radio, and could tell his parents were disturbed by the looks on their faces. “I wondered, ‘What is wrong?’ Mother said, ‘It’s nothing, it’s nothing.’ I asked myself, ‘Why won’t they tell me?’ I remembered going to the living room window; it was cloudy and damp-looking.”

As an 11-year-old at the dining room table with her aunt, “Jo-Jo” Foster, soon to be 89, remembers the radio broadcast telling them the United States was bombed. They couldn’t believe it. “Everyone was in danger; nothing could be done; there were hundreds of planes. My aunt was shocked. We were in absolute shock that it could happen to the United States. It was the first time ever. I said, ‘Oh my God. Oh my God.’ No one had ever done that.”

Tony Apuzzo was from the Astoria neighborhood of Queens, New York. It was Sunday at 3 p.m. He was lying in bed, resting and listening to the radio. The broadcast was interrupted. When sound returned he learned the United States had been bombed — he didn’t know where Pearl Harbor was.  The next day, he enlisted with the help of an altered birth certificate. He was 16.