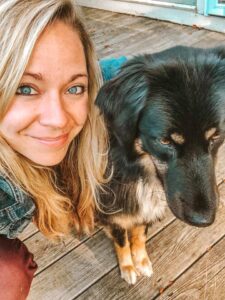 Kristina Balarezo, shown with her dog and running companion, Salsa, is serving as chair for the Massachusetts Breast Cancer Coalition’s Against the Tide event in Hopkinton.

Kristina Balarezo is not letting the COVID-19 pandemic keep her from a cause near and dear to her heart. The Hopkinton resident is serving as chair of the Massachusetts Breast Cancer Coalition’s Against the Tide, a multi-fitness event that raises funds to support cancer prevention efforts.

The event includes running, walking, paddle boarding and kayaking portions and was set to be held June 20 at Hopkinton State Park, with a similar event Aug. 15 at Nickerson State Park in Brewster. The pandemic has turned both dates into virtual events, but Balarezo said she is still going to participate in the 5K run.

And she’s bringing her dog, Salsa, along as well.

“The cause of curing cancer is important, but I’m also interested in the prevention side,” Balarezo said. “I think it’s important that we try to prevent cancer, rather than just dealing with it once we have it. I’m really interested in the outreach this organization is doing.”

So Balarezo will head out for a run sometime over the weekend of June 20 along with her 4-year-old rescue shepherd mix. Although, to hear her tell it, it sounds more like Salsa will be the one taking Balarezo for a run.

“She is better than me,” Balarezo said. “I am not a runner, I prefer to lift weights and do other exercises, and she loves to run and she loves to pull me. So she will be pulling me along.”

Against the Tide fits well into Balarezo’s personal and professional beliefs. She is both a life coach and certified in the field of holistic wellness, so preventative health and care is a passion of hers. She also specializes in mindset and motivation, a necessity in a time when so many of the most well-crafted plans have been upended and people are trying to make the best of challenging situations.

There still is a chance of having live events this year. Hopkinton is slated to host Against the Tide on Sept. 19 and Brewster would host an event on Sept. 26. At the Hopkinton event Balarezo will lead the warmups and serve as a waterfront safety volunteer.

Event organizers have tried to make sure registrants know they still are part of a team and working for the same cause. Fun packs were sent out to participants with things like bibs for runners and swim caps for those participating in water activities, just as they would have had if they were all able to gather in Hopkinton or on Cape Cod this summer.

“I think they are definitely trying to pivot with all of this and doing the best they can to make everyone feel seen and excited,” Balarezo said. “That can be hard when you’re not in person.”

Feeding off the emotions of other participants is vital in events like Against the Tide.
“That’s why these events are so special,” Balarezo said. “You’re around people who have lost someone to cancer or survived cancer themselves or who are battling cancer in that moment. Being apart can be hard. They are doing a good job of creating ways to bring people together.”

For more information about Against the Tide, visit the Massachusetts Breast Cancer Coalition website at mbcc.org or call 1-800-649-MBCC (6222). Kristina Balarezo’s fundraising page can be found at firstgiving.com/fundraiser/kristina-balarezo/Against-the-Tide-June-2020-Virtual2.