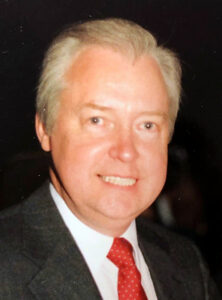 John R. Riley, 83, of Wellesley, passed away peacefully at home surrounded by his family on May 28.

John was born on Dec. 16, 1935, in Troy, New York, the third son of the seven children of the late James M. and Blanche (Peterson) Riley. Raised in Watervliet, New York, he was a 1954 graduate of Watervliet High School where he was class vice president, vice president of the Student Council, editor-in-chief of the yearbook, and voted “wisest” in the senior poll. John earned his B.B.A. in accounting in 1958 from Siena College, where he was vice president of the Business Society and junior class treasurer. After John and Anna-Mary were married in 1959, they moved to Boston, where he attended Boston College Law School for a year until its evening program was closed.

A certified public accountant, John spent the first part of his career at various Boston public accounting firms, the last of which was Touche, Ross, Bailey & Smart, a predecessor to Deloitte Touche. In 1975 John left public accounting to join one of his clients, A.W. Chesterton Company in Stoneham, as vice president of finance, a position that he held until his retirement in 1996. During that tenure, he was instrumental in the company’s expansion both domestically and internationally. Governor Michael Dukakis appointed him to the Foreign Business Council for the Commonwealth of Massachusetts.

John served on the boards of the Third Century Foundation and the Catholic Foundation for the Archdiocese of Boston. He took great pride and pleasure in attending his children’s, and later his grandchildren’s, sporting events, plays, concerts and school activities. He often joined in on the activities himself, playing softball, skiing, camping and whitewater rafting, among other activities. He took particular joy in the family Blue Bird motor home, “The Eagle R,” whether he was enjoying a cross-country trip, a visit to family in New York, or tailgating at Boston College football games.

A hallmark of John’s life was his deep commitment to his Catholic faith. He often attended daily Mass and was a Eucharistic minister. He established four scholarship funds at Saint John’s Seminary in Brighton in honor of priests, who were family friends. Later, his son Edward would be trained for the priesthood at Saint John’s Seminary and is now the Seminary’s Dean of Men and Director of Pastoral Formation.

In addition to his parents, James and Blanche Riley, John was predeceased by his granddaughter, Veronica Rose; his brothers James Riley; George Riley and his wife, Zelda; Thomas Riley and his wife, Dottie; and Vincent Riley; and his nephews, Scott and Jeffrey Matthews.

A funeral Mass of Christian burial was celebrated on June 3 at St. John the Evangelist Church in Wellesley. In lieu of flowers, donations may be made to Saint John’s Seminary, 127 Lake Street, Brighton, MA 02135.