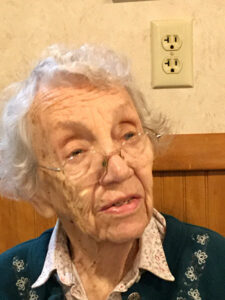 Mary Waldron (Polly) Furber, 98, passed away peacefully on April 21, at Woodlands Assisted Living in Waterville, Maine. She was born on Oct. 8, 1920, in Framingham, to Josephine Louise (Gardiner) and Schuyler Waldron VanNess.

As a teenager, Polly spent summers in Waterford, Maine. At age 14, she and her Aunt Sally climbed Mount Washington. Polly graduated from Framingham High School in 1938 and continued her education at Russell Sage College in New York.

Polly married Mark Burnham Furber, Jr., son of Alice Gibbs Furber and Mark B. Furber, Sr., of Framingham, on Jan. 1, 1942. They loved to dance to the big bands in Boston on weekends. During World War II, they were stationed at Camp Gordon, Georgia. After the war, the Furbers lived first in Natick, then moved to Elm Street in Hopkinton, where they raised their children.  Polly was an active member of the Hopkinton Historical Society and the Hopkinton Public Library.

After retiring, Polly and Mark settled in East Berlin, Pennsylvania, where they founded and operated a small two-horse stable. Training at the York Fairgrounds, for 25 years they followed the East Coast harness horse circuit, racing their horses at major tracks and fairground venues from Maine to Florida. They made many friends along the way, and their grandchildren have many fond memories of helping with the horses. Retiring one more time, they moved to Sidney, Maine, to share a home with their youngest daughter and son-in-law.

In and out of their family life, Polly pursued her interest in genealogy, old cemeteries and old maps. She could always be found in the research section of the local library or at the nearest historical society. She delighted in making family history come alive for her children and grandchildren, and always remembered everyone’s birthday.

A life celebration will be held at the Sidney Grange on June 16 from 2-4 p.m. Internment will be at the Maine Veterans Memorial (Mt. Vernon) Cemetery on June 17 at 10 a.m.

The family would like to thank the staff at The Woodlands and Beacon Hospice for their excellent care. Memorial tributes in Polly’s name may be made to the Sidney Historical Society.