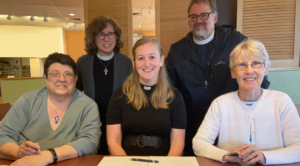 Attending the July 25 signing of a letter of agreement were (front, from left) Laurie LaBrecque, senior warden of St. Paul’s; Rev. Mary Rosendale; and Sharyn Philcox, senior warden of St. Stephen’s; and (back row, from left): Rev. Martha Hubbard, regional canon of the Diocese of Massachusetts; and Rev. Rich Simpson, canon for the ordinary for the Episcopal Diocese of Western Massachusetts.

“It’s been a joy to assist in bringing these two congregations and Rev. Rosendale together!,” said Rev. Martha Hubbard, regional canon of the Diocese of Massachusetts. “They are remarkably open to a ministry God is calling them into together, and have shown great generosity and flexibility in working out the details. This is an experiment that is bound to benefit these parishes and be a model for others who might also be called to collaborate.”

The deal was signed July 25 and takes effect Sept. 1.

“We are thrilled that we are able to bring a shared priest to St Paul’s parish and join the congregations in a supportive arrangement for celebrating our Christianity and the Word of God,” said Laurie LaBrecque, senior warden of St. Paul’s. “We look forward to starting this journey together with St. Stephen’s.”