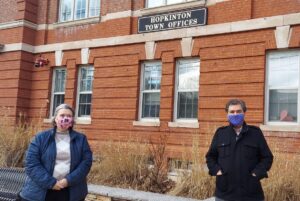 Muriel Kramer (left) and Irfan Nasrullah are running for the two available seats on the Select Board. PHOTO/HOPKINTON DEMOCRATIC TOWN COMMITTEE

Democrats Muriel Kramer and Irfan Nasrullah announced Tuesday that they have launched their campaigns for the two available Select Board seats in the May 17 Town Election.

Kramer, a 30-year resident, is a former Select Board chair who currently holds a seat on the Planning Board. She has held a variety of appointed and elected roles since 2002, including serving as deputy town moderator from 2009-17. A U.S. Air Force veteran, Kramer is a licensed clinical social worker.

Kramer found herself in the news this past August when a few individuals were allowed to anonymously criticize her before the Select Board for her work with the Massachusetts Bail Fund, an organization that posts bail “so that low-income people can stay free while they work toward resolving their case.” The organization came under fire after bailing out some individuals charged with violent crimes, including a convicted sex offender who was charged with a raping a woman weeks after being released.

Kramer defended her work with the group and said she would welcome the opportunity to explain to her critics why she feels the fund is crucial.

Nasrullah is seeking to return to the Select Board, for which he serves as vice chair. A past member of the Planning Board, Nasrullah is an attorney who specializes in environmental and real estate law, with his office in the center of town.

Select Board member Brian Herr, an independent and former Republican, has previously said he does not intend to run for reelection this year.