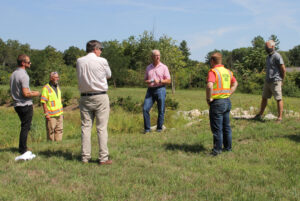 The Legacy Farms Road North street acceptance will come right down to the wire, with the Select Board deciding to address the article in a meeting just before Saturday’s Town Meeting after waiting to see if the town and Legacy Farms developer Roy MacDowell can come to an agreement about a potential issue with pesticides on the site.

MacDowell indicated he thought he was in good shape after completing the punch list of items required for the road to be accepted by the town. He met with town representatives earlier in the day to walk through the site and ensure everything was up to standards.

“I’m happy to report the entire punch list is complete,” Department of Public Works director John Westerling told the Select Board at Tuesday’s meeting. “We are satisfied that they have met all the requirements for the construction of the roadway — just the construction.”

However, the pesticide issue is proving to be a sticking point. After some back-and-forth discussion, the board decided to let town counsel and MacDowell’s attorney try to come to an agreement that is satisfactory to town administrators and the Select Board.

MacDowell said the pesticide issue was only recently brought to his attention.

“I don’t know where this issue about pesticides keeps coming up, because any issues that were with pesticides were resolved long ago and were remediated,” MacDowell said, insisting there has never been a discussion about pesticides specifically in the roadway area. And he said he has seen no evidence that there is any contaminated soil there.

MacDowell said he was “blindsided” by a request earlier in the day that he indemnify the town relative to any potential issues with pesticides in the future. He said he was advised by his attorney that it’s not common practice nor is it reasonable to ask for this indemnification, which he said was “quite extensive” and would have “a dampening effect” on the value of the homes in the development.

“I went over it with my attorney and he sees no reason why we should be doing that,” MacDowell said. “And I see no evidence as to why it’s even an issue.”

Westerling noted that the town could be on the hook in the future if pesticides are detected.

“The big concern for the town is should we have an excavation in the future, if we have to replace a water main, and there are soils that come out of that trench, we have to test the soils,” he explained. “If they have pesticides in them then we have to pay for their disposal at an offsite area — which there are none of those in New England. So it could be a large [problem].”

MacDowell countered that the area — formerly Weston Nurseries property — has been completely done over, and the top 3-10 feet of soil — where he said the contamination would have existed —has been replaced.

“The pesticide that everyone’s talking about here, it’s called dieldrin,” he said. “Dieldrin was typically used for fruit trees and things such as that with Weston Nurseries many years ago. The site was tested thoroughly before we bought it. And there were two locations that were located with dieldrin. Dieldrin by its nature sits in the top 6-12 inches of the soil. It’s in the actual loam portion of the soil. And those are the areas that it was tested. It’s not down 3, 4 or 5 feet.”

Added MacDowell: “Any possible soil that’s in that 50-foot buffer was long taken out and replaced with gravel and various other materials to create the road structure. So even though there were no indications of dieldrin in those areas, even if there were that would have long since been gone because of the massive excavation that took place.”

Town health director Shaun McAuliffe said dieldrin is not the only issue.

“It’s not the dieldrin alone. It’s the fact that an asphalt batch plant, a landfill, cannot take any pesticide-contaminated soil,” he said. “The soil can’t be discarded just anywhere because of the Similar Soils Provision that exists. The issue is if there are any pesticides at detectable concentrations that are dug up they have to be handled differently than if the soils were from another location in town.”

Added McAuliffe: “It’s not the dieldrin, it’s not any of the other pesticides that are documented in that [2017] report. It’s the fact that they’re there. I’m entrusted with protecting the residents’ exposure to potential environmental issues. And that’s the only reason that this has been brought up.”

Ultimately the board decided to let the attorneys and town administration work on the issue over the next few days in hopes that an agreement can be reached so that the board can support the street acceptance, which is being pushed well ahead of schedule so that school buses can travel on it and make it safer for families who reside in the development.

“Our indication is that we’re not going to sign anything that indemnifies,” MacDowell said. “But there may be some middle ground that we can discuss with [town counsel Ray Miyares].”

Added MacDowell: “The worst case is you don’t agree and we don’t agree, then you decide how you want to go forward.”