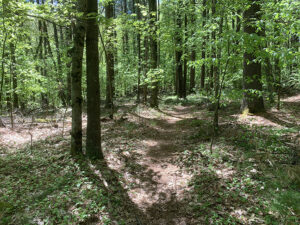 The Connecticut company that plans to install a ground-mounted solar array in the woods off Frankland Road recently unveiled a possible new strategy to get the project moving forward despite lawsuits from abutters, applying for a forest-cutting permit from the Massachusetts Department of Conservation and Recreation (DCR).

Abutters, some of whom have sued the town as well as Seaboard Solar in an attempt to stop the project, earlier this month received a notice from T. Jepson & Sons, a land-clearing company based in Spencer, indicating the tree cutting would begin “on or about” Feb. 15.

Permitting from DCR takes the town out of the approval process.

Seaboard Solar was granted a permit by the town last year for its solar array, on land previously owned by Liberty Mutual, but the litigation has put a hold on that.

The DCR application for a short-term harvest came as a surprise to members of the Conservation Commission when it was announced at last Monday’s meeting.

Commission chair Jeff Barnes noted that under the agreement with the town, about 48 acres of land was to be handed over to Hopkinton Area Land Trust (HALT) for preservation.

“My sense is they’re going forward with the solar project, then this forest cutting plan flies in the face of some of the mitigation that we approved for the buffer zone disturbance at the property,” he said. “So I think we need a little bit more clarification from Seaboard Solar on this as to what the plan is.”

HALT president Morrie Gasser indicated he had not been apprised of the proposed plan, which, if approved, would allow the company to cut all trees greater than 8 inches in diameter on the entire property, which abuts the Deer Run trails near the Ashland border.

“It was a total surprise and we knew nothing about it until notified by ConCom,” he stated via email. “I have not had any discussion or contact with Seaboard since mid-December, but also I haven’t attempted to contact them when I heard about this.”

Representatives from Seaboard Solar did not reply when contacted by the Independent for comment. However, in a pre-hearing statement to the Massachusetts Department of Energy dated Jan. 13 — in response to an appeal by a group of abutters that calls itself Save the Forest — Seaboard Solar referenced the DCR application and indicated it was for a “potential short-term harvesting of trees” and that the company had “no present intention of harvesting trees” in the area outside of where it is necessary to construct the solar array.

Seaboard Solar recently posted no trespassing signs and requested that HALT remove from its website any maps that show the property and any trails on it (HALT complied).

Conservation administrator Don MacAdam noted that the town is limited in its powers with the DCR involved, and all the conditions that were attached to the previously approved permits would not apply.

“We can ask for [clarification], but obviously we’re not the regulatory authority under this,” he told the Conservation Commission. “All we can do is write to DCR and say if we agree with where the wetlands are shown. And I think I would probably write in the letter, ‘Oh, by the way, there’s a solar project on this, and wouldn’t that fly in the face of the exemption under the bylaw?’ Why would it get a forest cutting plan if it’s not going to be a forest anymore, it’s going to be a solar farm?”

Added MacAdam: “It might be valid to tell Superior Court that, wait a minute, the commission based an approval on buffer zone disturbance based on a mitigation package. Now that mitigation package is getting screwed around with.”

On advice from town counsel due to the ongoing litigation, the commission switched to executive session (a private meeting) to further discuss the situation.

In other Conservation Commission news from last Monday’s meeting, the commission denied a request from Grasshopper Energy to start work on its solar array on Wilson Street prior to obtaining all the necessary permits.

The project was approved in July 2018, and while the company has obtained a special permit, scenic road permit and storm water permit from the Planning Board, it has not yet acquired a building permit.

Christopher King from Atlantic Design Engineer, working with the applicant, explained that due to the conditions at the site — the slope of the land makes erosion mitigation and sediment control more challenging — it would be preferable to start during the winter, while the ground is frozen.

“We’re basically coming before you respectfully requesting permission to start the site work prior to getting our building permit so we can get a jump during the winter months here,” he told the commission. “We intend on submitting for the building permit probably within the next month, I would say, and we are also going to be back before you folks to request to amend our order of conditions so that the filing that you approve will be consistent with what we submit for the building permit. But again, we’re asking for the ability — there’s a lot of site work out here to do ahead of that point in time, and we would just like the ability to get a head start on that.”

The commission unanimously voted against allowing the work to start without the building permit.

MacAdam suggested instead of requesting to amend the order of conditions, the company instead approach it as a project change request. King said he would take a closer look and get back to the commission.

The developer of a home site at 47 Stoney Brook Road violated the order of conditions by disturbing land past an approved point, the commission confirmed.

Brenshaw Corporation was working on the rocky property in late December when it committed the violation, said conservation scientist Matt Varrell, a town consultant.

“There was definitely a lack of communication from the applicant,” Varrell said.

“It seems like when there was a boulder that was maybe in the way, the decision was made to push the erosion controls closer to the wetland as opposed to reducing the impacts inside the site, which I think was a little presumptuous,” Varrell added. “And certainly within the areas that shouldn’t have been disturbed, it’s hard to tell if there were any large trees taken down, but there’s certainly evidence that some shrubby vegetation was lost.”

Dave Marquedant, an engineering consultant for Brenshaw whose company marked the original site lines, acknowledged that the contractor missed numerous opportunities to alert the town as to what had happened.

When the issue arose, “They should have notified [the commission] to have Matt go out and make sure that the limit of work was based on that approved plan. They never made that call,” Marquedant said. “After that, the wood cutters went in, cleared the property, still no call to conservation. The same wood cutters, my understanding, the same wood cutters removed the stumps, still no call to the commission. Erosion control then went in. A lot of our stakes got destroyed during the wood cutting phase. I think at that point I reached out to [developer] Dave Wilkinson, and he reached out to Don. They stopped work — they never started work. …

“We then got notified from Dave Wilkinson to re-stake the limit of work. So we had done so. We saw Matt out on the site [in early January]. We walked right from Stoney Brook Road to about three-quarters of the way in, almost to the property line. And what we have on the ground is an erosion control line that’s a little bit closer to the wetland edge than what was approved. We were then asked by Dave Wilkinson to go out and locate that existing back edge of siltation fence and also the limit of disturbance based on the tree cutter. We’ve done that. We’re in the midst of plotting that right now. At that point we can present that to the board. There’s only two little spots in the back, furthest away from Stoney Brook Road, from memory, that are slightly beyond the previous approved line.”

Barnes said the commission will address the issue after getting more complete information.

“When we assess what the full scope of the incursion was, then the commission can evaluate whether restoration is necessary or what course of action we should take,” he stated.