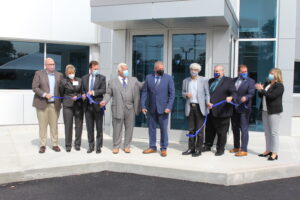 Lykan Bioscience held a ribbon-cutting ceremony for its facility on South Street in September 2020. The company now is looking to expand. FILE PHOTO/JOHN CARDILLO

A draft of the tax increment financing (TIF) agreement between the town and Lykan Bioscience was presented to the Select Board on Tuesday for its consideration, with a vote to come at a future meeting.

Lykan is looking to construct a 112,141-square foot manufacturing facility a short distance from the building it already occupies on South Street. The project, which would be done in partnership with property owner Southfield Properties, includes demolishing two existing buildings at 103-109 South Street and constructing a new facility. The project is expected to cost approximately $70 million — $50 million coming from Lykan and $20 million from Southfield — and Lykan is to make an additional $20 million investment in personal property.

The TIF will allow for an exemption from all or part of the anticipated increase in taxes. For property taxes, it starts with a 95 percent break in the first three years and then decreases each year by 5 percent, ending with a 40 percent break in the 14th and final year. For personal property, Lykan would get a 100 percent exemption for seven years.

In exchange, Lykan has goals it must meet, including hiring 125 new full-time employees over a five-year period and not requesting a tax abatement while the agreement is in place, although Lykan can discuss the assessment with the town before it is finalized.

If the Select Board approves the deal, it would go to Town Meeting voters. The state then would need to give it final approval.

Lykan agreed to a TIF in 2019, and the town has credited the company with living up to its end of the deal and being a good neighbor.

Lykan president and CEO Patrick Lucy said he’s looking forward to the opportunity to expand the company’s base in town.

“There was a lot of work from [Town Manager Norman Khumalo’s] team,” he said. “They were excellent to negotiate with and worked hard on behalf of Hopkinton.

“We’re thrilled to have the success we’ve had to date in Hopkinton. As some of you may know, we’re doing an internal expansion right now. We’re spending millions of dollars inside the current footprint to double our manufacturing capacity to max out the current footprint. Business has been very good.”

Health Director Shaun McAuliffe, in his COVID-19 update to the Select Board, said the town is eyeing a return to making masks optional once the numbers show this latest surge has subsided.

“Our metrics continue to improve,” he said. “The Mass. DPH [Department of Public Health] reports that 60 Hopkinton residents have contracted COVID in the last seven days. We’re aware of about another 20 who have tested positive through home tests. These numbers are a vast improvement over what we have seen during the month of January. Twenty of the 60 that have tested positive are school age. So we’re still seeing roughly 30-40 percent by week in that school-aged cohort. We’re happy to report we’re seeing very few in the 60-plus age group. They continue to utilize barriers, and we’ve had a lot of success in that group.

“The DPH reports that our 14-day positivity rate has dropped to 12.35. That’s from as high as 21.24 on the 13th of January and 22.19 on the 20th of January. So again, we’re definitely moving in the right direction. And then consistent with the discussion earlier, I believe that we’re moving at a rate that would allow us to A) discontinue a mask requirement in the municipal buildings and that would allow in-place meetings moving forward.”

McAuliffe noted that the DPH releases the latest data each Thursday at 5 p.m.

“So we’ll be reporting Friday morning to the town manager and the emergency management group and then we can act accordingly as we receive the reports,” he said. “Both the CDC [Centers for Disease Control and Prevention] and the DPH report us in the high risk for community transmission. Our data from last Thursday has Hopkinton at 105 cases per 100,000. The cutoff for the high risk rating is at 100 cases per 100,000, so we’re just over that limit. But again, we believe that we’ll be down in the moderate risk rating or low risk rating come Thursday.”

McAuliffe said that by the end of February vacation he anticipates Hopkinton will be below 5 percent positivity and have a weekly count of about 10 cases per 100,000, which would put the town in the low rating.

“When both the municipal buildings and the high school were without face coverings back in November, our positivity rate was at 1.34, and then when the schools elected to extend their face covering trial we were at a percent positivity of 4.06. So we’re still at a much higher rate of illness than we were before. But given the significant number of residents that have contracted COVID, given the fact that our vaccination rates are outstanding, our booster rates continue to improve, I believe we’re going to be in a place where we can remove the face covering requirement in the municipal buildings and then move back to in-person meetings.”

McAuliffe added that he expects the state to lift the mask mandate for schools at the end of this month.

“We suspect from conversations that we had today that we’re going to see either movement through the governor’s office or through DESE [Department of Elementary and Secondary Education] and we suspect that they’re not going to continue the mask mandate beyond February 28th,” he said. “We’ll be working with the School Committee and the superintendent’s office to evaluate where we stand and where we go from there.”

There are three omicron variants in the community, including one case of the “stealth” omicron variant BA.2, but McAuliffe said the DPH does not anticipate the newer variants to have a substantially different impact.

He said the town is attempting to acquire home test kits for the most vulnerable in the community and encouraged residents to “continue to be smart” so that the town can get its numbers down quickly.

“Anything we can do to retain him in any aspect of the town is awesome,” Select Board Member Brendan Tedstone said.

Member Muriel Kramer said she attended Powers’ retirement party in Milford on Friday despite the ice storm and reported there was a good crowd there.

“Even on a terrible night it was very well-attended, and I was very happy to see that for him,” she said.