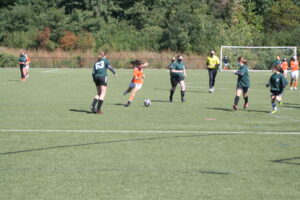 At its meeting Wednesday, the Parks & Recreation Commission discussed progress made on several ongoing issues, including the Fruit Street turf fields assessment, some decaying Town Common trees and the nearly completed dog park.

Ian Lacy, the lead project advisor for Tom Irwin Advisors, a firm that designs and maintains green spaces, told the commission that he performed a study on the fields in response to concerns about wear and tear on the synthetic turf. He said he believes the fields will last for another 18 months to two years before they need to be replaced.

The assessment looked at factors such as the condition of the fibers, seam splitting, gradients and infield depth.

“Ultimately, the fields are old,” said Lacy. “We know that, and they are not in the worst condition that we’ve seen for sure.”

There are some places where seams can separate. Because synthetic carpet is laid from side to side, it isn’t feasible to patch places, he explained.

Lacy said the minimum cost to replace the fields would be around $900,000. Padding underneath would be an estimated additional $120,000.

“Most people tend to be going for the padding nowadays,” he explained, “because crumb rubber [from tires and other rubber scrap] has been in the news these days about whether it’s safe or unsafe.”

More environmentally friendly fills will raise the cost but improve the quality of the field while helping the environment.

In the short term, field maintenance is key to preserving the quality of the fields. During play, the infill tends to get moved to the sides of the field, which erodes the protection from tearing by cleats. Maintenance, Lacy estimated, could cost up to $10,000 a year, depending upon the number of visits involved.

“That would just be good housekeeping anyway,” Lacy said. “And that would just make sure that everything is safe and secure from the users’ perspective.”

Most of the fields he works on generally have a lifespan of 10-12 years before they need to be replaced, and these fields are at the end of their viability.

Lacy will present a proposal for repair and maintenance at the next meeting on Sept. 29 at 6 p.m.

Parks & Rec Department Director Jay Guelfi noted that the fields were re-lined this week for football, soccer, lacrosse and field hockey, which improves their appearance.

The commission unanimously voted to approve the recommendation of the town’s former tree warden to remove two dying trees and prune three others “because of safety reasons as soon as possible.”

Guelfi said that he and Commissioner Laura Hanson met the day before with former tree warden Joe Regan, who has owned a tree company for 54 years. Guelfi called Regan “the godfather of trees.”

Regan advised him that two trees “pose a pretty significant public safety hazard and need to come down.” In addition, three maple trees need to be pruned, while another tree needs to be stabilized. The estimated cost is around $6,000.

Guelfi noted that he is meeting with an arborist to talk about tree maintenance and the potential need for replacement.

“I think the five of you need to decide, along with maybe other groups in town, about what you want that Common to look like over the next 5-10 years,” he said. “We have trees that are dying.”

The roots for some have nowhere to grow, which is leading to their virtual strangulation because they are intertwining, preventing them from absorbing nutrients.

“It’s not about aesthetics,” Guelfi stressed. “It’s about public safety.”

Hanson added that the soil quality is poor for some types of trees, while other types would be hardier.

Kelly Grill from the Hopkinton Chamber of Commerce appeared before the commission to propose a new addition to the Dec. 4 Holiday Stroll — a sleigh ride around the Town Common to replace the usual trolley.

“With COVID and not knowing what’s happening, we decided not to do the trolleys this year,” she explained. “But as something fun, we would love to have a sleigh ride around the Common.”

She contacted a company that would provide a carriage that can fit about six people and use two horses. The company would need a place to park the trailers, and she hoped the sleigh could run in the afternoon, before the tree lighting.

Guelfi said he would contact the police and fire chiefs as well as the Board of Health and the town engineer to see if this is feasible.

Terry also advised Grill to submit an application for a permit to secure the date. He noted that more people are using the Common without reserving it beforehand, which can cause scheduling conflicts.

Also, there will be an ice sculpture on the Common formed into the logo for the stroll.

“It’s a really, really fun thing to watch,” Grill said of the carving process. Terry said that lighting could augment the sculpture. 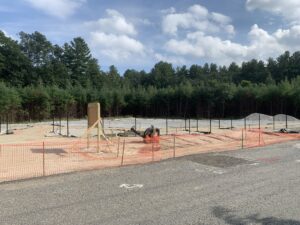 Construction continues on the Fruit Street dog park, which is expected to be finished by the end of the month. PHOTO/JERRY SPAR

Guelfi announced that the dog park is scheduled to be completed by the end of the month, with rice stone and finished concrete to be placed next week.

However, the gazebo will not be available until January because of supply issues.

Progress made on pickleball

Guelfi said that the chair of the Community Preservation Committee has given him authorization to spend $2,500 on a feasibility study for pickleball courts. Possible locations could be the Irvine-Todaro property on Hayden Rowe Street or off Fruit Street. It would be designed by Andrew Leonard, who also did the dog park. There also is the possibility of tennis courts, because a tennis court’s size equals two pickleball courts.

“We need to be on that bandwagon,” said Commissioner Cynthia Esthimer, who noted the popularity of the sport.