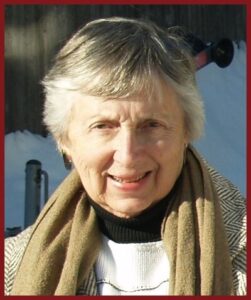 June A. Shanabrook, 88 of Hopkinton and a former longtime resident of Ashland and Weston, passed away Feb. 15 after a period of declining health. Born in Bucyrus, Ohio, she was the daughter of Frank and Lura (Brown) Zartman. She was a graduate of the College of Wooster with a bachelor’s in music education. June was a music teacher and went on to work for Tufts Health Plan as a marketing data coordinator.

June’s family story is an American journey. Her maternal grandfather was a homesteader first in New Mexico and then settling in Oklahoma before the territory became a state. The Brown family continues to farm that same land. Mom would tell stories of the drive from Mount Eaton, Ohio, where she grew up, to see her grandparents on the farm in Billings, Oklahoma. Both the Zartman and Shanabrook ancestors emigrated from Germany centuries ago in search of their own farmland, eventually settling in Ohio. In Mount Eaton her dad was the minister of the Evangelical and Reformed church and her mom taught piano. It was fun to hear stories of how mom dated every boy in her high school class of six and how the social studies teacher drove the class to Washington, D.C., in his station wagon for her class trip.

June went on to the College of Wooster, where she met Paul Shanabrook. Recently found letters originally sent to her friend Diana on her year abroad in Edinburgh revealed the courtship happening back in Wooster. After graduation in 1954 the now-engaged June taught music in Justus, Ohio. Once married in 1955, June moved to Webster Groves, Missouri, where Paul attended the Eden Seminary School. After Paul’s graduation from theology school, June and Paul moved to Cleveland for the founding of a new United Church of Christ, St. Mark’s in Cleveland. Paul later took a stewardship leadership role in the UCC main office in Boston, moved the family in 1962 with Nevin, then 4 years old, and newborn Eric to Wellesley Hills. Eliot followed in 1964, leaving three boys for June to care for! This care extended to the Atlantic Ocean, where June embraced sailing the New England coast, far from rural Ohio. In 1971, the family moved to Weston, when Paul returned to preaching at Weston Congregational Church.

June and Paul went their own ways in the early 1980s. June thrived in her work at Tufts, befriending so many people she worked with. Then living in Ashland, she worked, then retired, enjoying traveling and attending music and theater events with her boyfriend, Bruce MacDonald. June also enjoyed her volunteer work with recent immigrants finding their way.

June’s interests in music and theater were a lifelong enjoyment. Teaching piano out of the house and playing for local theater companies kept her active and fostered friendships. June embraced her New England home, finding solace and beauty here. Among her favorite places were the Isles of Shoals, Frenchboro Island, and Woodmans for fried clams! Wonderful family trips to Europe were planned by mom, Frommer’s “Europe on $50 a Day” in hand, an experience that gave her children a unique worldview experience and education.

Friends and family will be notified of an informal gathering, at June’s request, as an opportunity to celebrate June’s life and share memories. This will take place this spring sometime. June had wanted her ashes to be buried on her beloved Star Island, and the family will privately honor her memory in that way.

Donations in June’s memory may be made to the Star Island Corporation (starisland.org).